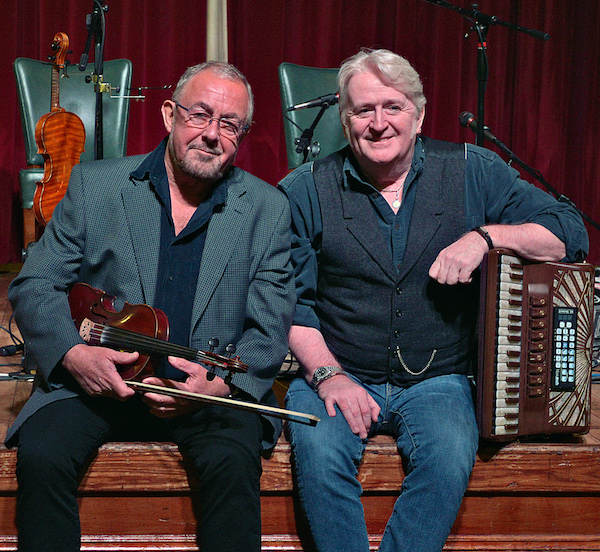 Aly Bain & Phil Cunningham return to the stunning surroundings of Cottiers in Glasgow on their Spring Tour 2020 !
What more can you say about these two stellar musicians, now embarking on their 34th year of working together.
Aly Bain and Phil Cunningham have established themselves as the epitome of excellence in the world of traditional music. Mike Russell of the Glasgow Herald has described them as “probably the best traditional musicians you are ever likely to hear”.
With their musical magic and quick-witted humour they will pull your emotional strings one moment and have you falling off the seat with laughter the next.
Two of Scotland’s most acclaimed traditional musicians have been delighting audiences across Scotland with their masterful, versatile and amusing performances and leading us in the dance on BBC’s live Hogmanay show for over two decades. Oct 2013 saw the legendary folk duo receive the The Sunday Mail Great Scot Award’s ‘Lifetime Achievement” Award.

In 1988, two members from two of Scotland’s leading bands, “The Boys of The Lough” and “Silly Wizard”, came

There will be one interval.
This is a seated event.

Ticket prices include £1.50 admin fee per ticket. Fee applicable to all tickets, including tickets bought on the day.

Tickets are sold as general admission - you will not be allocated a specific seat in the auditorium.

Due to all seats being on ground level, some seats may have restricted views. Please call the box office if you have any questions regarding this.

Please note, our box office is only manned when there is a performance in the venue. Phone messages and emails to the Box Office are checked at least once a day, Tuesdays to Saturdays.
Box Office Information.

Fancy a meal?  The Theatre